Theresa Keeping Benoit was born and raised in Stephenville, Newfoundland, number 5 in a family of 11 children, all born in 11 years and 11 days. She is of both French and Mi’kmaw ancestry, and is a proud status Indian and a member of the Qalipu Mi’kmaq First Nation (Stephenville). Theresa is a mother of four children, ten grandchildren and two great-grandchildren, all of whom live in Alberta. Theresa has post-secondary training in business administration and the arts. She received a Master Printer and Graphic Arts Trade Certification at Red Dragon Printers, where she completed her Apprenticeship. She attended Keyano College. 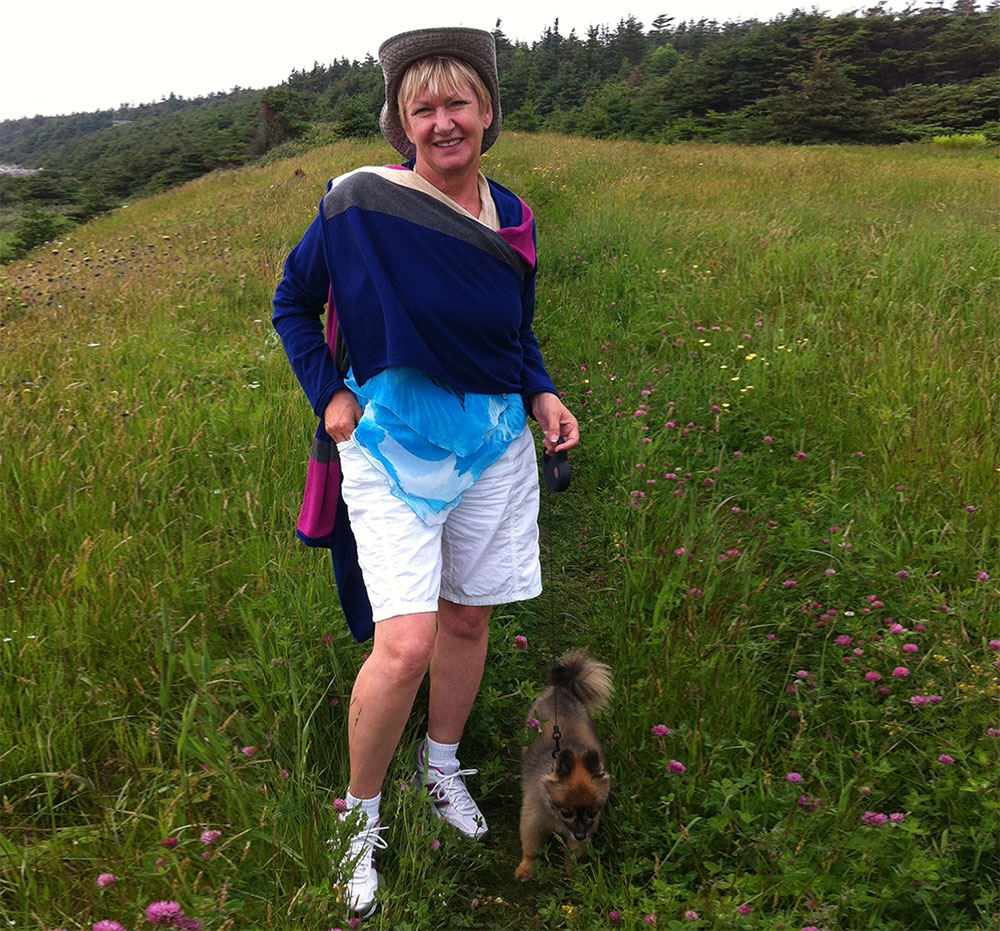 Theresa’s Acadian ancestors settled in Stephenville arriving from Cape Breton with the first migrants who settled in 1848. These settlers established a farming and fishing community from premises below Indian Head, southeast of the present town. Theresa’s family and forefathers established their homestead at Stephenville Pond now known as the Port Harmon. Because of the 1941 Lend-Lease agreements extensive transfers of military equipment and supplies from the American government to support the war effort was matched leases throughout the world, including land leases in the Dominion of Newfoundland (One of the original 5 Dominions of the British Empire including Canada, South Africa, The Irish Free State, Australia and New Zealand). In Stephenville, 1859 acres of land were leased in the northeast end of St. George’s Bay to build Harmon Field, which would eventually become the Ernest Harmon Airforce Base, the largest U.S. air force base outside the continental U.S. and a major refuelling stop for aircraft en-route to Europe. Thousands of men from the surrounding area soon found work in a broad range of areas including as tinsmiths, sheet metal workers, construction labourers, carpenters, etc… The population increased virtually overnight, from a small hamlet of a few hundred people in 1940 to a modern town of 5000 people by the mid 1950s.  As a part of the construction process, Stephenville Pond was transformed into the beautiful Deep Sea Port it is today, and the “Port of Stephenville” was born.  Theresa is the President, CEO and majority shareholder of the Port of Stephenville, which sits on top of her ancestral home.

As was the case with many of the local population, Theresa moved away in the late 70’s, ending up in Fort McMurray, first taking a job as a Graphic Artist at Jean’s Printing, one of many family-run businesses owned by Mrs. Francis Jean. Theresa later purchased the Print Shop from Mrs. Jean, which was the first of many acquisitions and business start-ups which she has been involved. From her start in printing, Theresa perceived the need to establish a supply chain of goods needed by the Oil Sands Plants during their start-up and operation stage. In addition, she opened a Promotional Gift shop “Classic Awards” and purchased silk screening and engraving machines to brand gifts for her customers.

From these humble beginnings, Theresa has carved out a long career in business spanning many decades, beginning with President and CEO of the 40-year old company, TS Signs Printing and Promo Ltd. in Fort McMurray, Alberta.  She built three businesses, also in Fort McMurray, and built three commercial buildings. She moved her three related businesses, the print shop, promotional shop and sign shop, combining them as one business in her new state of the art building, on MacKay Crescent in the heart of the industrial area to Fort McMurray as TS Signs. She is the currently President and owner of McKay Links Inc. involved in Commercial Development and Real Estate in Ft. McMurray, Alberta, and she currently leases office and industrial space. Theresa is a long-time member of Northeastern Alberta Aboriginal Business Association (NAABA) in Ft McMurray.

After spending over three decades away from her native Newfoundland, she returned to Stephenville in 2007.  Since that time, she has invested and worked hard to establish a sustainable business presence in her native Stephenville. Currently, she is the majority shareholder and President of three Companies: Vinking Marine Enterprises Inc. which operates a 360 acre industrial estate; Oceanview Estates which focuses on serene waterfront living for families and retirees; and, the Port Harmon Authority Limited (which trades as the Port of Stephenville). All are Aboriginal companies, which respects traditional indigenous values and traditions, with a long-term business goal to create economically-sound, environmentally-sustainable companies which create attractive and sustainable jobs for local families, including employment in cooperative programs for secondary and post-secondary Indigenous students. 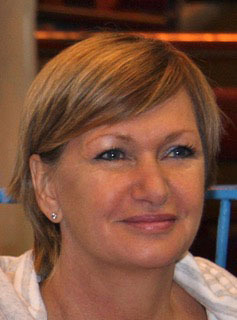 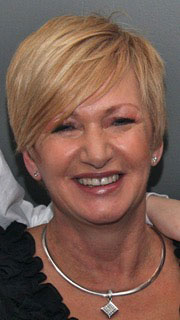 Theresa is a dedicated fundraiser for charity, a community volunteer and strong advocate of Aboriginal and disability rights. Her volunteer activities include membership on boards in religious, health, social and political associations.

Some of Theresa’s volunteering accomplishments include Girl Guides, Birthright, Bowl for Kids’ Sake, Old-timers Hockey, Minor Hockey, Father Patrick Mercerdi High School, teaching art and pottery, John Banovich Society for the conservation of wild animals in Kenya, Frank McKenna society for humanitarian projects in Haiti, lifetime member of Ducks Unlimited, lifetime member of the Federation of Canadian Artists, lifetime member of Safari Club International. Theresa is a lifetime member of the Audubon Society.  Some of her accomplishments are: Small Business of the year award for TS Signs, Printing and Promo Limited, nominated as Alberta Business award of Distinction, nominated as RBC Entrepreneur of the Year Award, recipient award as an Ambassador for hiring immigrants.

Theresa is also an accomplished wildlife, portrait and nature artist who has displayed her work throughout Canada. Theresa’s painting passion includes: working in a variety of mediums such as oil, acrylic, watercolour, silk-screening, as well as pen & wash and airbrushing. She enjoys painting with different materials such as canvas, board, exotic papers and fabrics.  If Theresa were to choose a favourite artistic genre, she would choose Wildlife. She is fascinated by animals and how they live together throughout the history of the world. Many have become extinct and this moved her to participate in conservation of the wild spaces, animals, and the worlds ecosystems for all generations to come. As a member of many groups and society’s she has travelled the world photographing, sketching and painting birds and animals in their habitat.

As an Aboriginal woman. she grew up in the outdoors engrossed in subsistence fishing and hunting, this gave her access to habitats of animals. She demonstrates this in every stroke of her brush as her style of expression is realism. She has won awards in her professional life and as an artist at The Calgary Stampede, Safari Club, Ducks Unlimited, Canadian Wildlife Federation, the Wood Buffalo Artist Forum. She has attended numerous studies, courses and workshops throughout the world as far as Africa, USA, Europe, Bermuda, British Columbia and Alberta, and supports many clubs promoting outdoor education. 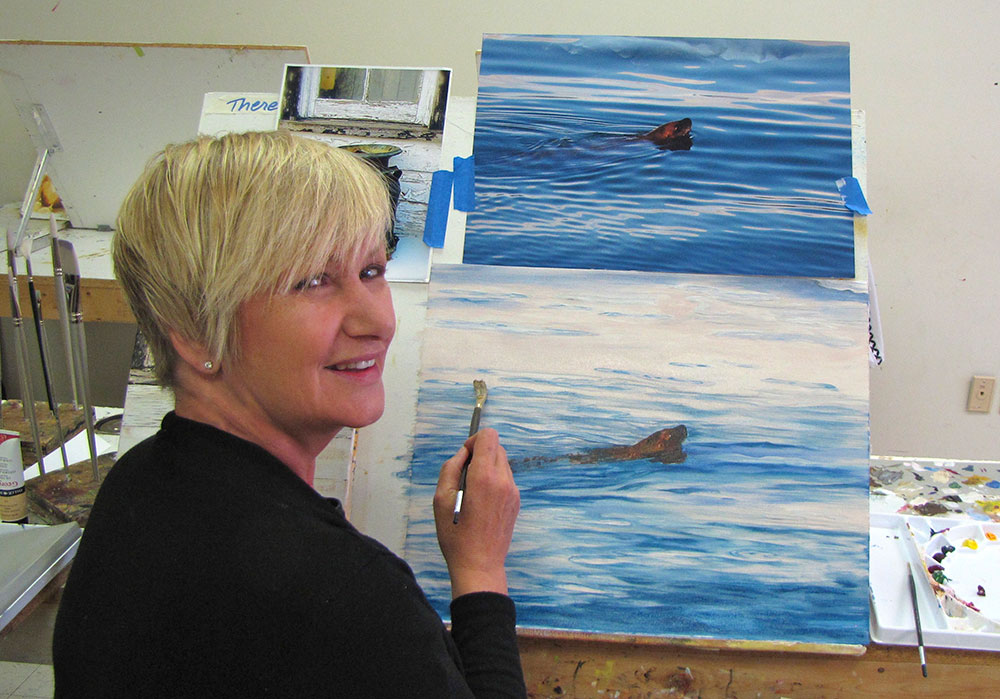 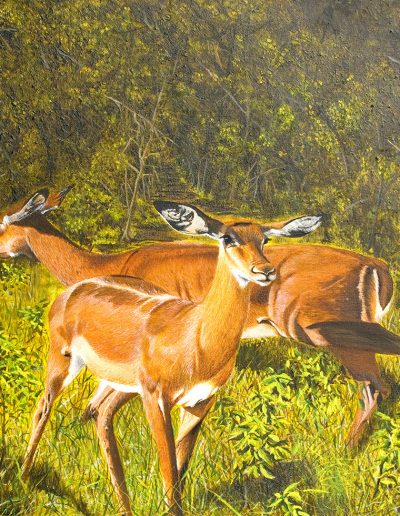 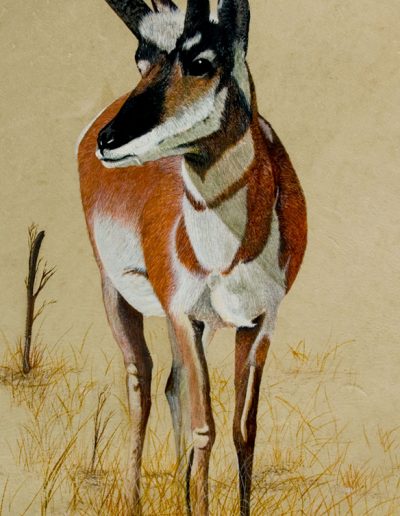 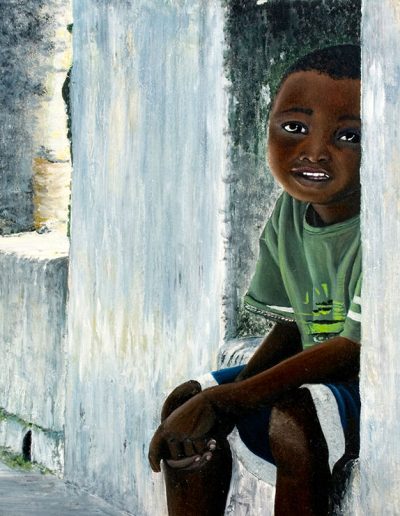 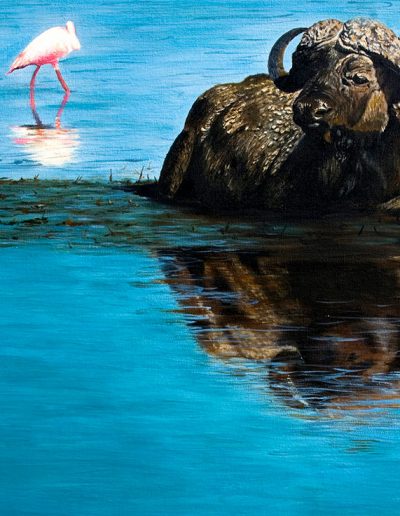 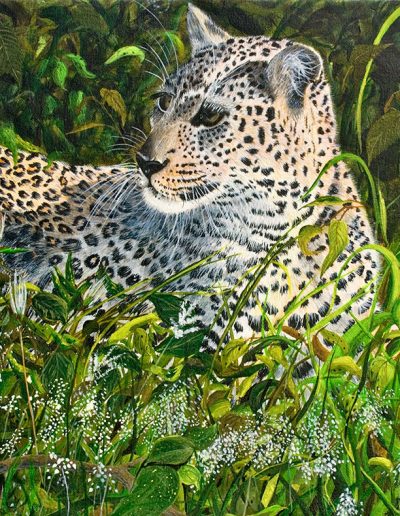 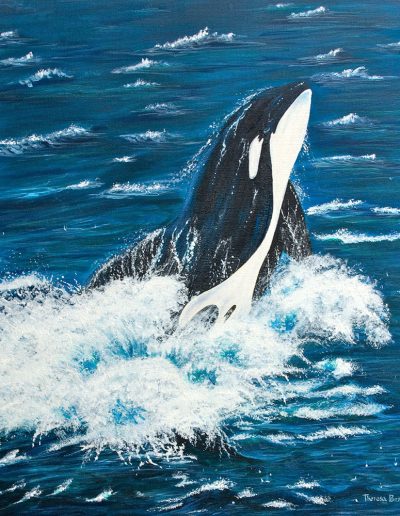 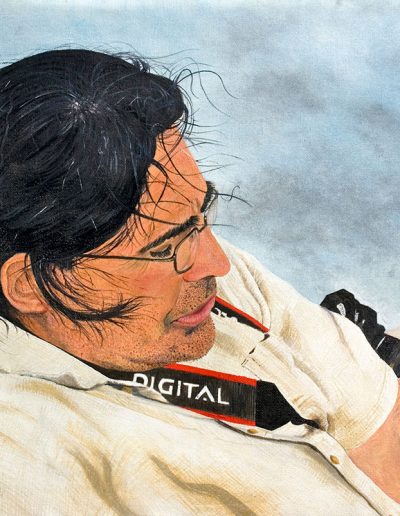 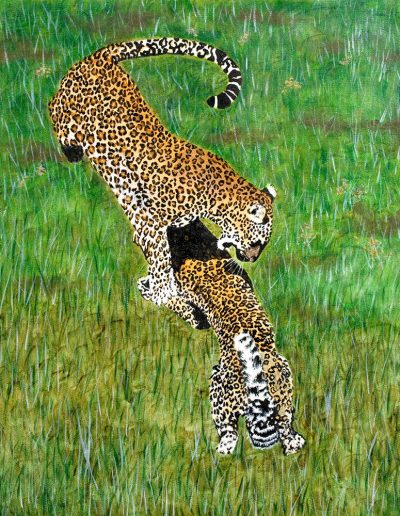 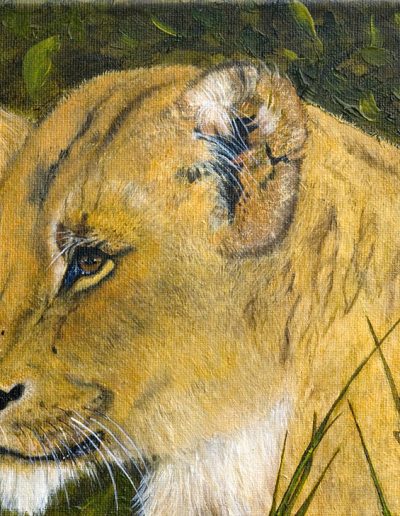 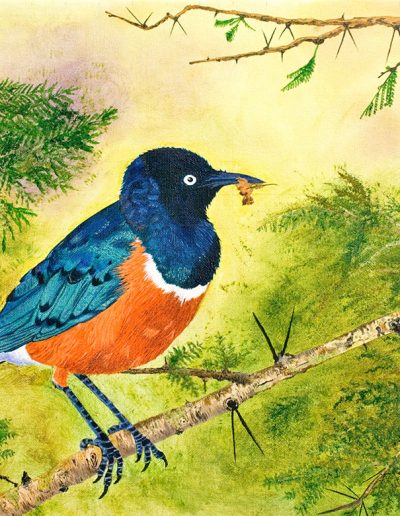 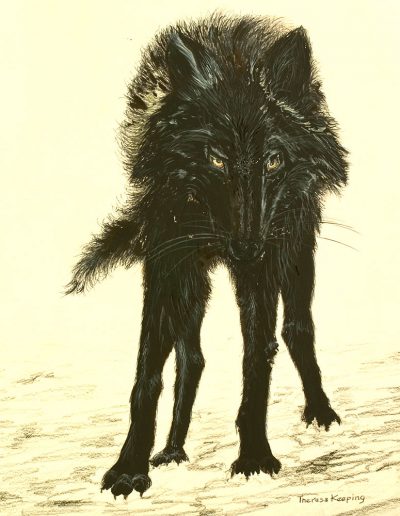 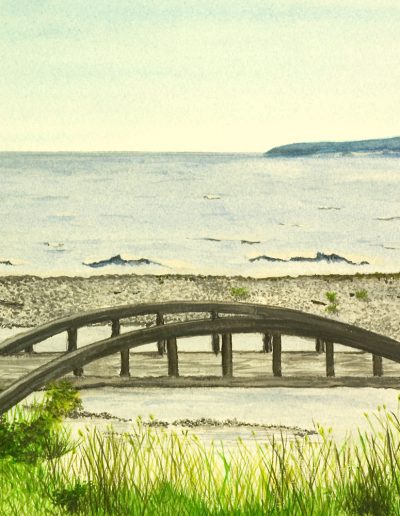 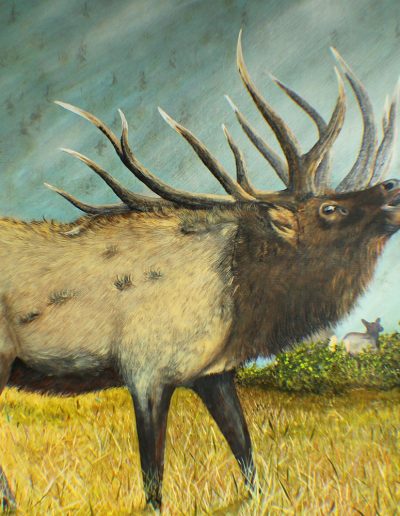 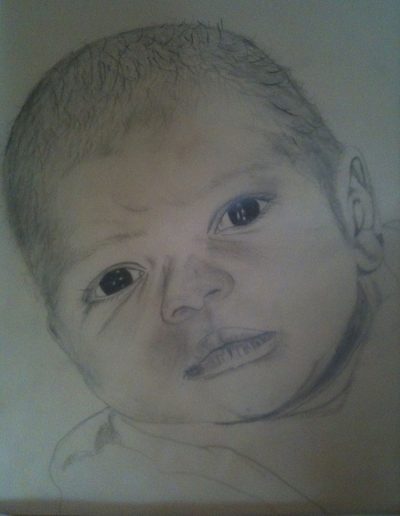 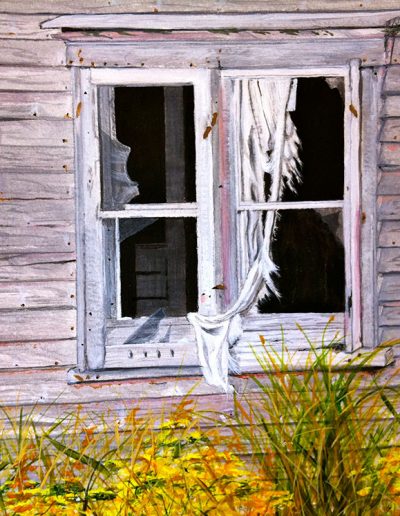 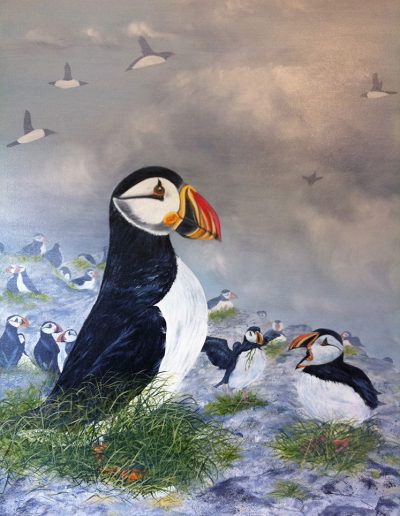 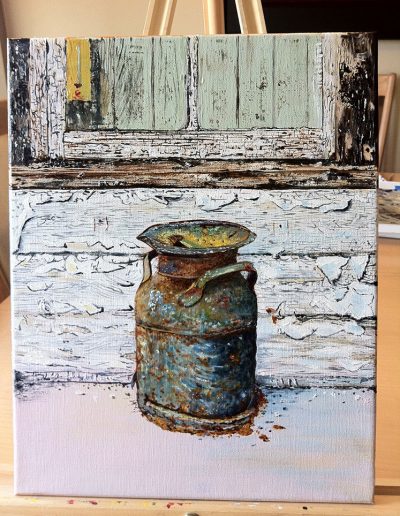 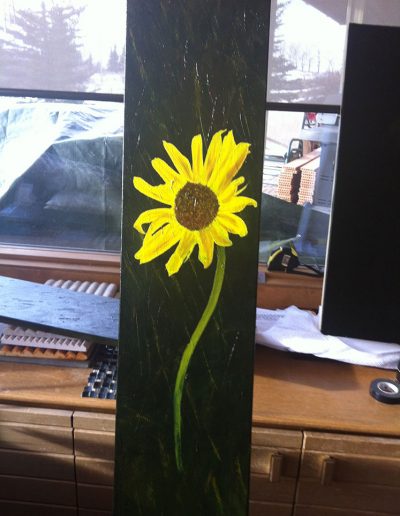 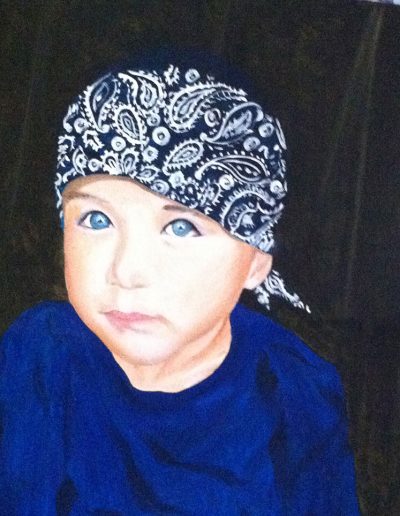 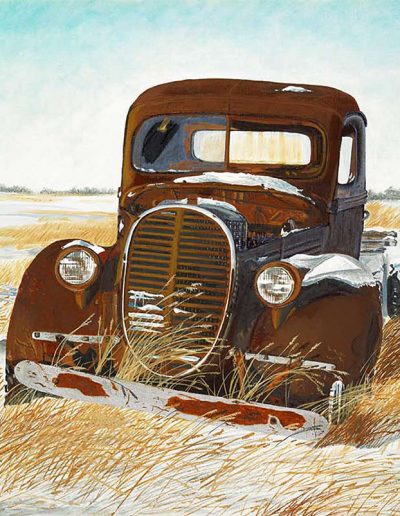 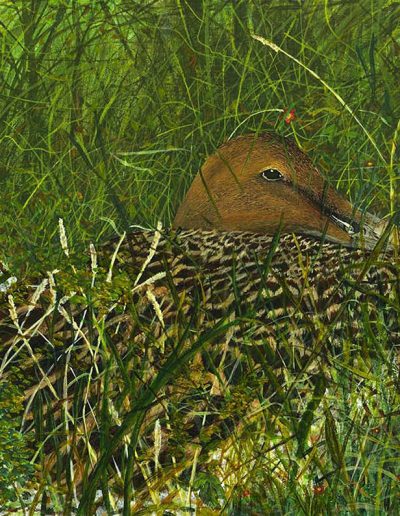 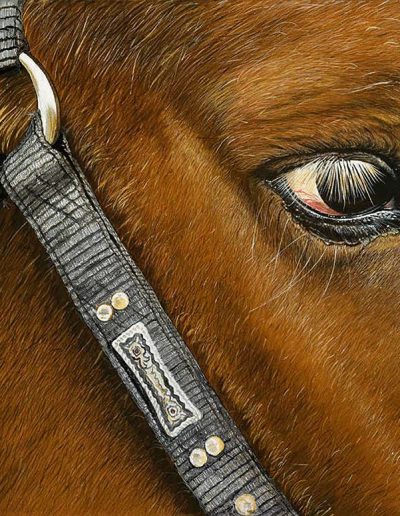 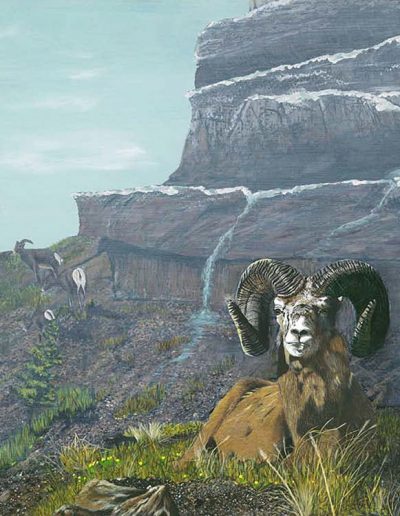 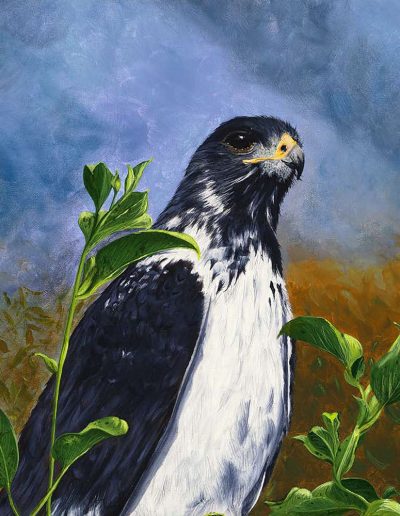